Described as a ‘landmark moment’ in the history of education in the town, the event was attended by His Majesty’s Lord-Lieutenant of Dyfed, Miss Sara Edwards accompanied by Lord-Lieutenant Cadet Martha Ashcroft, together with The High Sheriff of Dyfed, Rowland Rees-Evans Esq, school pupils, staff, governors, trustees, representatives from Welsh Government and Pembrokeshire County Council, and contractors Morgan Sindall Construction.

The Princess Royal’s visit began with a guided tour of the £48.7million school by headteacher Jane Harries and head prefects Lucy Ashton, Niall Griffiths and Aimee Pettit, during which Her Royal Highness met students from various classes and chatted to them about their work.

Following the tour, the opening ceremony took place in the hall, where The Princess Royal was formally welcomed by Councillor Guy Woodham, Cabinet Member for Education and the Welsh Language. 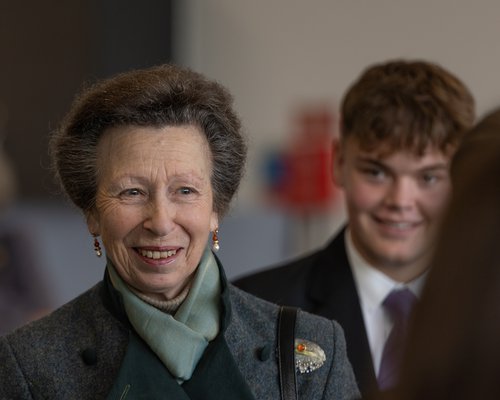 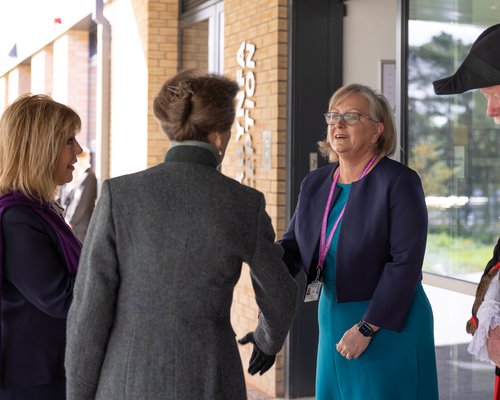 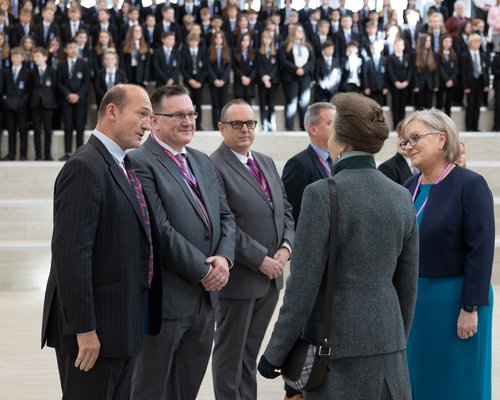 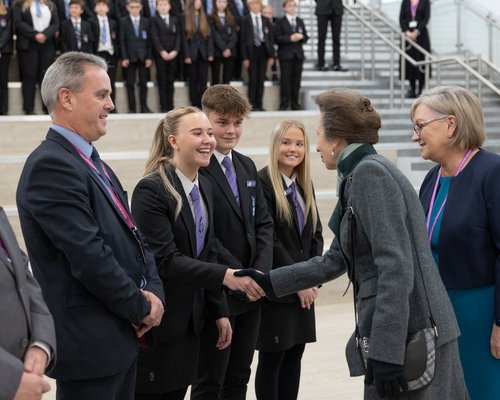 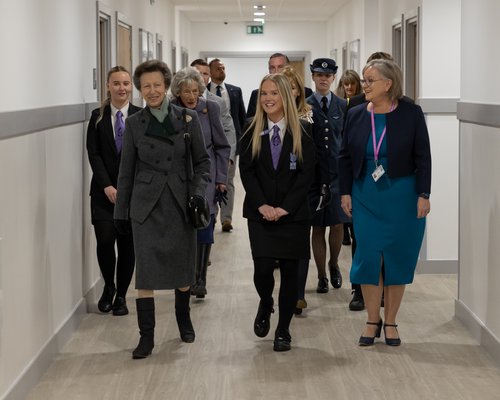 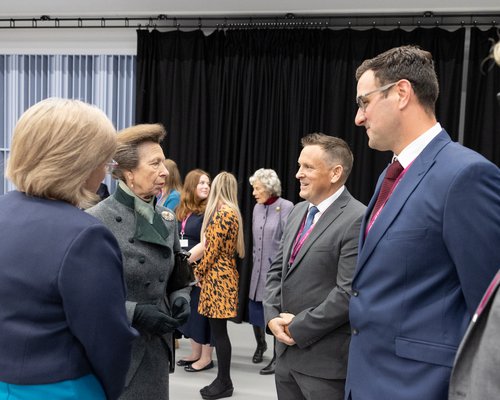 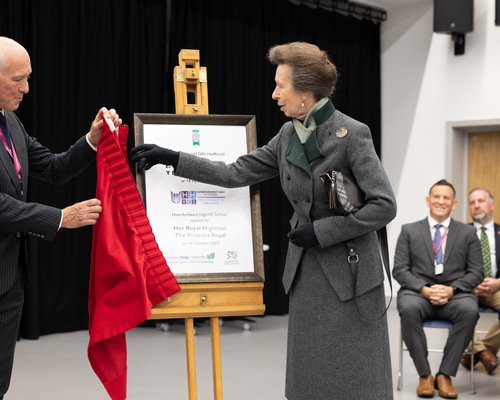 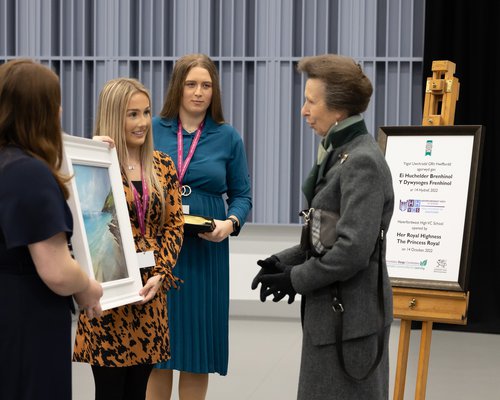 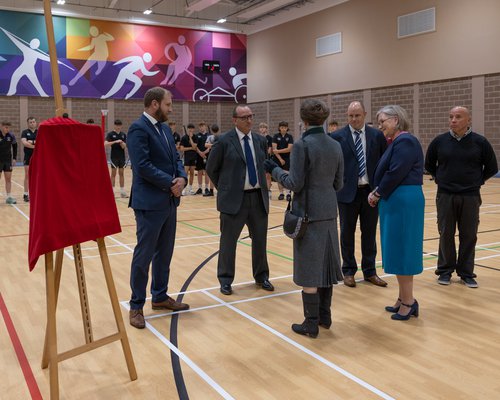 Cllr Woodham said: “We are indebted to so many people for their part in creating such a wonderful and inspiring school. I know we are all incredibly proud of what has been achieved.

“With its outstanding facilities together with the unrivalled dedication, care and encouragement of its teachers and school staff, Haverfordwest High VC School provides an inspirational environment where pupils can achieve excellence together.”

The school choir then gave a wonderful performance of Singabahambayo Thina, before Chair of Governors Paul Lucas gave the vote of thanks.

“Ma’am, we take this opportunity to offer you and the Royal Family our sincere condolences following the loss of our former sovereign Queen Elizabeth, and thank you for formally opening this wonderful school and leisure complex,” he said.

The ceremony concluded with the presentation of gifts by former head prefects Caitlin Arran, Isla Davies and Anna Long. The gifts comprised a commissioned painting by Art Teacher Christopher Prosser of Watwick Bay in Pembrokeshire – the location was chosen as Her Royal Highness visited the beach with her family as a child - and a book of condolence from the pupils and staff following the death of Her Late Majesty Queen Elizabeth II.

Following the visit, Headteacher Mrs Harries said the whole school had been delighted to welcome The Princess Royal.

“It was an honour and privilege to welcome Her Royal Highness and to show her our fantastic facilities that will provide educational excellence for generations to come,” she said.

“We have been overwhelmed by the enthusiasm and interest from our pupils, and we are so very proud of them today. Their pride in their work and the school is exceptional.

“The pupils were offered the opportunity to be part of the ceremony in the hall and provided thought-provoking reasons that clearly demonstrated how much it meant to them that a member of the Royal family was performing the ceremony.”

The Princess Royal then concluded her guided tour with a visit to the school’s sports provision, known as the Pembrokeshire Sports Village, and officially opened the facilities.

Cllr Paul Miller, Deputy Leader for Pembrokeshire County Council, said: “‘As you can see, the facilities are outstanding – from this fantastic eight-court sports hall, to the wonderful 3G rugby pitch, Strength Academy Wales, and much more.

“We’re serious about the future of sport in our county and we’re investing in it. It’s a genuinely exciting time and I’m sure I speak for everyone when I say how delighted I am to see the culmination of such an ambitious project.’

Haverfordwest High VC School provides educational and sports facilities for 1500 pupils aged 11-16 and 250 sixth form students. Jointly funded by Pembrokeshire County Council and Welsh Government under its Sustainable Communities for Learning Programme, the school was completed ahead of schedule in August 2022 despite the challenges of Covid and Brexit. The project management team were from the County Council and the contractors were Morgan Sindall Construction.

The Minister for Education and the Welsh Language, Jeremy Miles said: “I would like to congratulate all involved in the opening of the new Haverfordwest High School. I am delighted that through our Sustainable Communities for Learning Programme we have not only been able to provide an inspiring learning environment for children and young people in the area, but also exceptional sports and outdoor facilities which will benefit the whole community.”

Rob Williams, ar​ea director of Morgan Sindall Construction, said: “We are incredibly proud to have played a role in the delivery of Haverfordwest High VC School and would like to extend our thanks to The Princess Royal for adding a real sense of occasion to the official opening.

“This school will make a real impact on the lives of local people with first-class sports facilities and will provide an enhanced learning environment for pupils to be inspired for generations to come. It is a key contribution to the Welsh Government’s important 21st Century School programme and one which we are very enthusiastic to collaborate on.”